Operational systems created by Apple have always been more secure than their counterparts in the respective industry niche. That’s also the case with iOS used for iPad and iPhone devices. It is stated that these devices are more secure for users when compared to competition mobile systems Android and Windows. This sounded legit mainly because Apple doesn’t publish applications that are not previously tested on their app store.

Things went south for Apple regarding their security and safety authority when celebrity photos were downloaded from iCloud by hackers. Another big hit regarding this subject happened in February this year when it was announced that iPhone devices have a major security flaw, and can leave their users open to MITM attacks. This put in question Apple’s ability to keep iOS completely safe for its users. There are still some apps that stand as the best iOS security software, which will increase the security level of your Apple mobile device.

What can happen without an iOS Security App?

iOS is designed in a way that you can’t install a complete antivirus program, because this area is heavily controlled by Apple, and you get all the latest features you need with each update you make. Still there are many other things to consider rather than viruses that come from the Internet. Information phishing has been huge in recent times.

In order to prevent any possibility of security breach of your iOS mobile device, you will need to use couple of apps that have different purpose. Without a security app your phone could easily be blocked by an outside device or some important information that you store on your iCloud account, or that you have stored in your Safari browsing history could easily be obtained by third parties. It is hard to state which the best iOS security apps are, but the list below includes some of the top choices in this area.

In February this year Apple released a patch that was the 7.0.6 version update to their seventh edition. This happened because of a major SSL connected security breach. Some experts speculated that Apple made the code with a flaw on purpose, so they could later fix it and release a new patch. SSL (Secure Sockets Layer) or more commonly known as TLS (Transport Layer Security) is used to create a connection between a site and its visitor in which all of the information that goes both ways is encrypted, so if a hacker gets his hands on it the information would be unreadable.

The problem a raised when professionals in the industry noticed that there is a major flaw in the iOS’s code that was used to validate the SSL, which caused bypassing one of the most important validation steps located in the web protocol used for secure communication. This allowed hackers to retrieve information from iOS devices that were using an unsecured Wi-Fi hot spot connection. 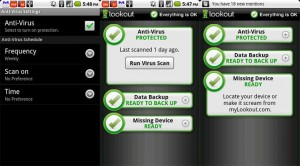 Lookout is one of the top players in the mobile security niche and it is always a part of all the top lists, because the company has made improvements since its last year edition, but they have still not reached the level of their product targeted towards Android, Blackberry and Windows users. The biggest difference reflects in the fact that Lookout Mobile Security for iOS still doesn’t possess an anti-malware scanning feature.

It tries to make up for this by giving out warning signals whenever you enter an unsecured network. Some of the useful options included in the package will still allow you to keep high level of security of your iPhone. You can always see if the device that you use was jailbroken at any point of time, you can track your device if it has been stolen or lost, easily back up all of your data and delete all of it if your device has been stolen. Most of these options are included in the premium version of the app which is worth $3 per month, but you can still track your phone and be aware of all malware alerts with the free version.

McAfee’s WaveSecure is a silent application that will always work in the background and give you alerts to all possible threats that are luring your phone. It has a very easy to handle user interface where you can easily manage your data even from a remote device, connect with other users, lock your device and locate it if it is stolen or lost. Although the premium Android version of the same software has a price tag of $29.99, you can use all of the features for iOS for only $19.99. The only thing that you need to do is create an iTunes account.

Firewall IP is a specific iOS security app that is mainly focused towards blocking all outgoing connections for devices that have been jailbroken. There are also couple of important alerts that the application sends if your mobile is trying to start a connection with a third party device.

It is highly customizable because users can create their own policies, block certain connections and block content depending on the type. You can purchase the app for $3.99, or download it directly at Cydia’s application store.

There were lots of problems connected with the usage of Safira on any iOS device because of the all increased cases of phishing. That’s why this iOS security apps 2014 revelation software can be a crucial part of keeping your mobile device secure. It alerts you each time you want to visit a webpage that could potentially be phishing for your information. Even when you use search engines, Webroot’s SecureWeb will tell you which of these addresses are safe to visit.

Apple has created one of the most secure online communities compared to its counter peers, but there are still some security breaches from time to time. They are always taking the matter in their own hands and are taking care of all antivirus issues, but you should always add at least one iOS mobile security app that will keep you safe from malware, phishing and will improve the level of your security while you’re browsing the Internet using Safari.

What we cover
Recent Posts
Popular posts: Last 7 Days or So
TwitterFacebookLinkedInEmail