The usage of mobile devices is increasing, and so is the range of activities you can do on the go. People use their phones and tablets to check their email, log into their bank account, follow the news, read ebooks and keep in touch with friends. Within this broad scope of activities, your phone may be vulnerable to cyberattacks or other security threats.

Cybersecurity has become a subject of interest for mobile users everywhere. You can find multiple apps that claim to protect your smartphone from viruses but, in reality, they’re still harvesting your data.

Malware protection software is still relatively new when it comes to mobile operating systems, so there’s no guarantee that it will always protect you or that it won’t come with security bugs. Here arises the need for other security measures, such as VPNs.

What Is a VPN? 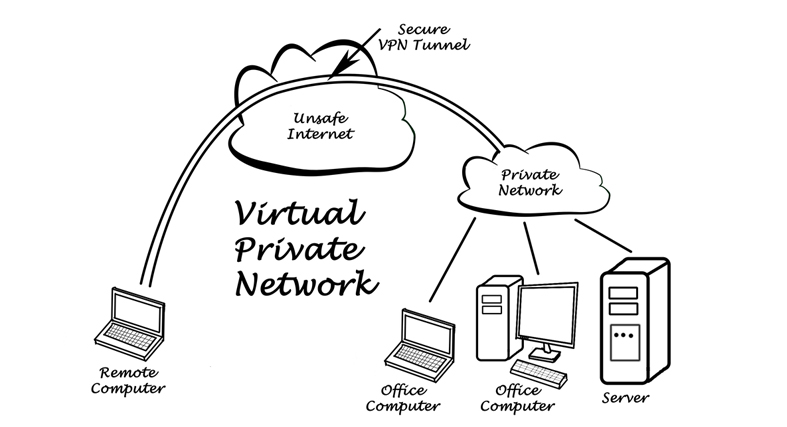 A VPN (Virtual Private Network) is a set of protocols and encryption methods that will add a secondary layer of security to your device. In simple terms, VPNs allow you to browse the internet while being secure and anonymous. It’s like traveling through the internet with nobody knowing who you are.

VPNs have been present in the PC industry for years, but providers only recently decided to start offering their services in the mobile industry. The good thing about their Android apps is that they are really easy to set up, contrary to some PC or macOS VPN providers.

Why Use a VPN?

There is a general misconception that VPNs are used only by people who travel or want to download torrent files.

The truth is, VPNs can and should be used by anyone who uses the internet—whether for work or fun.

Besides bypassing geolocation restrictions, these types of networks add another security layer to your device, and, together with your antivirus software, they provide a user with 100% secured anonymity. Everybody stores a lot of personal data on their Android devices, so it is becoming crucial to use Android VPN apps.

OpenVPN is one of the numerous Virtual Private Network protocols, and it is the most appropriate and efficient option for Android VPN usage.

You should know that it’s not possible to directly use OpenVPN servers from your Android device because Android doesn’t have built-in support for these servers; you will need to download an OpenVPN app.

Before you start using this app, it is necessary to root your device. Depending on your needs, you might even need integrated VPN support.

There is integrated Virtual Private Network support for PPTP and L2TP protocols only. When you connect to any of these VPNs, you won’t need to install any additional Android apps.

Just enter your smartphone settings and go to the More option that can be found in the Wireless and Networks menu. There, you will find the VPN or VPN Settings option, depending on the version of your Android software.

Here you can add a VPN connection by filling out some simple information, such as a network name, a type of VPN server and an address of the VPN. The address can be a numerical IP address like 192.292.3333.45.44, or you can enter a web-based IP address like vpn.provider.com (these are only examples).

You can use multiple integrated VPNs at one time and connect to them whenever you want. In order to add a network, you first need to have an Android VPN account.

In the next section, we’ll go through the best apps on the market today.

What Is the Best VPN for Android? 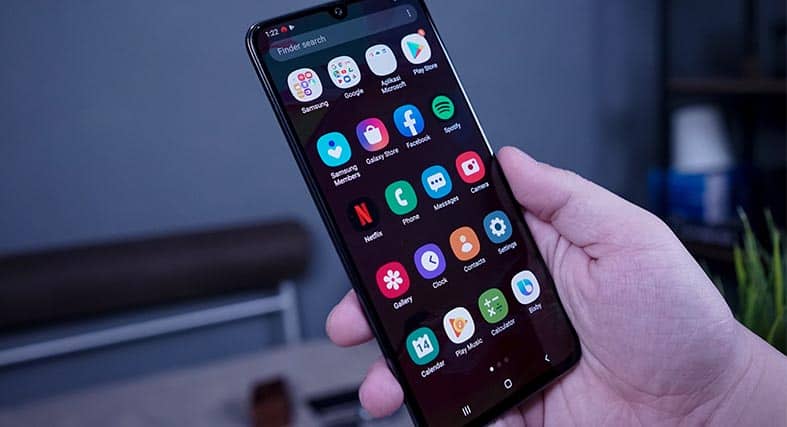 Most popular VPN apps have an easy setup process so that you can get access to quality security protection within minutes. Using any of these VPN providers will allow you to connect an integrated VPN to your Android device.

Here you will find some of the best Virtual Private Network providers on the market. We’ll be focusing on the options offered for Android devices.

NordVPN is one of the top Virtual Private Network service providers in the world, known for its high standard of encryption and its no-logs policy. Its Android app is very user-friendly, with a simple and clean interface that’s easy to navigate.

The app’s ‘Quick Connect’ feature allows users to connect to the closest server with just one tap on the screen. Or, you can choose from servers in 59 countries around the world. The app also offers a ‘CyberSec’ feature that protects you from malware and other threats you might encounter while browsing the internet. The app is available for free on the Google Play Store. 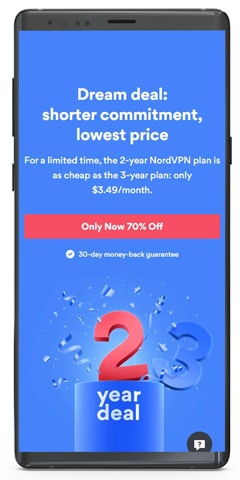 However, by buying a three-year plan and using our exclusive link you’ll get a significant discount on the service.

ExpressVPN is another one of the best VPNs for Android. If you don’t believe this statement, you can try their services for free during the trial period. One of the best things about ExpressVPN is that it has servers in more than 72 locations on three continents: Europe, North America and Asia. Tests have shown that it doesn’t decrease the speed or bandwidth of your internet connection, and it provides top-notch online security. The ExpressVPN Android app has been made available for free on the Google Play Store, too. 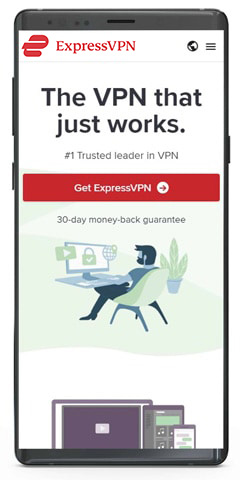 You can get ExpressVPN using our exclusive link.

CyberGhost offers a huge network of 6,400 servers spanning more than 89 countries. You can also search for servers that are streaming-friendly, with some options offering more quality than others. The app offers 256-AES bit encryption for top-notch security. The company has a no-logs policy, meaning your usage data will not be stored on their systems. You can download the app for free on Google Play. 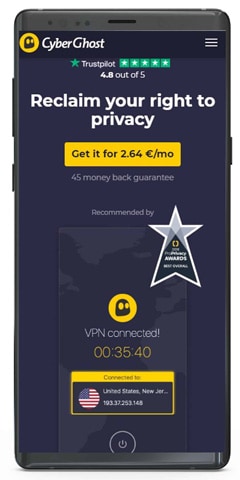 You can get a discount on CyberGhost by using our exclusive link.

Is There a Free VPN for Android?

It is not uncommon for people who are new to the VPN field to try out free VPN services for Android first to avoid spending money unnecessarily. We’re used to getting things from the internet for free.

Unfortunately, when it comes to free VPN apps for Android, it is best to stay cautious.

Typically, the company behind the Android VPN app would be making money thanks to the users’ subscription fees. In the case of free Android VPN apps, the providers need to find alternative methods of keeping the operation afloat. Unfortunately, some of those methods could have negative consequences for the users.

According to a 2016 study, 38% of the top free VPN apps for Android devices were found to contain malicious programs. Apart from hidden lines of code that were supposed to benefit the service providers at the expense of the users, it was not an easy task to find a free VPN app that wouldn’t be plastered with ads. Still, if the software you have downloaded comes with ads, but the provider doesn’t store information about your online activity, you could say that you have found a good free VPN for Android.

Many Virtual Private Network providers store such data and later sell it to third parties. Now, that doesn’t mean all mobile VPN Android providers are doing this, but it’s best to be careful.

Avoid downloading any free VPNs on your device without reading online reviews first. Also, don’t forget that numerous companies behind VPNs are conducting aggressive marketing campaigns. It’s best to base your opinion on several sources, or you might be deceived by paid reviews.

Which Free VPN Is Best for Android Devices?

Another critical aspect that you should focus on when choosing free VPN Android software is whether the logs about the user’s activity are stored. If a particular Virtual Private Network provider stores connection logs, then, unless you live in a region where using VPNs is illegal, you shouldn’t worry too much.

Connection logs contain information about when the users logged in and how much time they spent browsing the internet. Of course, the best VPN apps for Android won’t even store these logs.

It is important to note that connection logs don’t reveal what websites the users visit. It means that if government surveillance agencies or your internet service provider get their hands on those connection logs, they will learn that you’ve been using a VPN, but in most countries, the act of using VPNs is not illegal.

VPNs aren’t only used to mask criminal activity. They allow companies to protect their confidential information by providing their employees with private connections that are mostly resistant to hackers’ attacks.

Still, there are countries, such as Russia or China, where the use of VPNs is illegal, even if they aren’t used to mask any illegal activities. If according to the laws of your country of residence, the use of VPNs is illegal, you should ensure that you choose the best free VPN on Android devices that won’t keep any type of logs. One such app that doesn’t store connection or usage logs is hide.Me.

If you aren’t sure where to start or what you’re looking for, you should check out our top-10 list of the best VPN providers.

Should I Use a VPN on My Phone?

We are used to the convenience provided by the internet. There’s no need to go to the bank – you can log in on your bank’s website and transfer funds in a matter of seconds. The same applies to shopping – you don’t need to travel anywhere, as you can order almost any item imaginable off the internet.

However, this convenience also means that there’s a negative trade-off involved. Apart from obvious threats, like hackers, the data about your online activity is being stored by your internet service provider, who then sells it to third parties such as companies that deal with ads. There’s a reason why the advertisements that you encounter while you browse the internet match your online history.

If you install a Virtual Private Network on your Android device, your ISP won’t have access to your online habits.

This isn’t the only reason why the popularity of VPN software has skyrocketed in recent years. Here are some more benefits:

That’s why we tested and listed the best possible options above for you. We want to hear your experiences with OpenVPN and integrated VPN services for Android devices.

Maybe we’ve missed out on some good apps, so feel free to comment below if you know of any lesser-known Android VPN providers worth sharing.

Ali Qamar
Ali Qamar is a seasoned blogger and loves keeping a keen eye on the future of tech. He is a geek. He is a privacy enthusiast and advocate. He is crazy (and competent) about internet security, digital finance, and technology. Ali is the founder of PrivacySavvy and an aspiring entrepreneur.
Home Internet Security News Best VPN for Android [2021 Edition]
Leave a Comment Cancel reply

What we cover
Recent Posts
Popular posts: Last 7 Days or So
Share on TwitterShare on FacebookShare on PinterestShare on LinkedInShare on Email