The CEO of Gatwick has told reporters that drone flights have been designed in order to cause the maximum amount of disruption to the upcoming holiday season.

If recent reports in the media are believed to be true then we may just have witnessed the very first intentional and malicious use of drones for the purposes of disrupting civil aviation.

Some media outlets report continued sightings of a total of two different aircrafts which were remotely piloted, flying and going about their ‘business’ over and around the present London Gatwick Airport’s airfield.

The drones started their course on the evening of December 19.

Not only that, they actually forced London airport to suspend its business and remain closed to all the flights for a period longer than 24 hours.

Officials at the airport posted a letter on the official website of Gatwick in which the CEO of Gatwick Airport mentioned the continued and serious drone activity around the airport as a highly targeted malicious activity that was designed to do nothing else but the close the London airport and also bring the maximum amount of disruption in the run-up to the upcoming holiday season.

Not only that, but he also mentioned that the London airport had begun cooperating with the country’s top law enforcement agencies in order to put an end to the criminal activity.

Reports say that as of Thursday 7: 00 pm London time, the runway at the Gatwick airport still had not managed to make itself available for landings and takeoffs.

The airport recently announced that it was unable to operate because of the continued sighting of drones.

Other reports in the media say that some other airlines have gone as far as canceling all the flights until they receive further notice.

An airport spokesperson told the media that the airport authority apologized to all of its passengers who had to bear the impact of drone activity.

And this isn’t the first time this has happened.

Drone sightings have presented themselves as a real security concern and particularly around the airport in London for quite some time now.

Back in the year 2016, a scheduled British Airways flight had to land at the Heathrow Airport in London but while trying to do so it apparently struck a small drone.

The incident happened as the plane was approaching the runway for landing.

Then in the same year, the Airprox air safety board of United Kingdom issued an official incident report about a near-miss situation where a quadcopter had managed to pass within 20 feet of an Airbus A319 which was about to land at Heathrow. 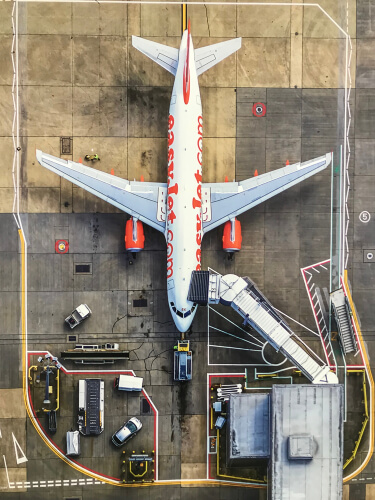 Fast forwarding to this year and just 30 days ago, another drone managed to come within 32 feet of another commuter aircraft that was trying to land at the Edinburgh Airport.

Moving to the United States of America, and one can find hundreds of drone-trying-to-hit-big-planes incidents in just the last couple of years.

However, according to most reports, almost none of the drone incidents have seemed to be a deliberate attempt on part of someone.

This is where the incident at Gatwick is different.

Most reports say that the drone activity at London’s Gatwick seemed like a coordinated and continuous attempt to shut things down.

Currently, the drone activity has spanned well over 24 hours.

Most believe that the activities at the airport would remain pretty much affected till tomorrow.

Now, even though there has been a vivid outcry over the actual impacts on security of drone flying as a consequence of the Gatwick episode, Theresa May, the current British Prime Minister, has emphasized that the United Kingdom had already successfully passed legislation which restricted the use of drones.

She also said that the United Kingdom did not need any other laws to tackle drone flying activities.

At a recent press conference, Theresa May said that she felt for all the involved passengers who have had to deal with disrupted travel plans because of the drone activity along with the action from authorities in order to take care of the situation with a good response.

Moreover, she said, authorities had made it abundantly clear that the activity that the airport had seen was indeed illegal.

Apart from that, she said, the people behind the drones, if caught, could face up to a total of five years in prison for endangering an aircraft.

She further said that authorities had initiated consultation processes on furthers aspects of such drone flying incidents which included expanded police powers.

Theresa ended her press conference by saying that the government would continue its work with the authorities working at Gatwick in order to bring the situation to a close and under control so that people get the opportunity to get on with their travel plans over the course of the upcoming holidays.

There is little doubt about the fact that incidents such as the one that happened at Gatwick could boost interest in all sorts of anti-drone technology.

Already the market is offering solutions such as drone guns along with jammers and many other kinds of drone countermeasures.

However, many of the current solutions that purport to deal with drones could actually end up interfering with regular air traffic.

Such examples include the GPS jamming systems which are developed and used by the military forces all over the world.

Zohair A.
Zohair is currently a content crafter at Security Gladiators and has been involved in the technology industry for more than a decade. He is an engineer by training and, naturally, likes to help people solve their tech related problems. When he is not writing, he can usually be found practicing his free-kicks in the ground beside his house.
Home Internet Security News Drone harassment forces London airport to close for an entire day
Leave a Comment Cancel reply