Skip to content
Home Internet Security News DuckDuckGo traffic grown 600% since 2013, thanks to NSA and Apple

On Tuesday, DuckDuckGo, the search engine that has developed its status as the privacy-friendly search engine said, the traffic of the search engine has grown 600% since the National Security Agency mass surveillance programs got revealed in year 2013 by Snowden. As Apple made DuckDuckGo a search option in iOS 8, it also exploded the overall search growth.


The DuckDuckGo, known as the privacy focused search engine, grown 600% since the news got broken by Edward Snowden about the mass surveillance program of NSA. DuckDuckGo is now encountering 3 billion searches per year on average.

What is remarkable, though perhaps not shocking, is that the search engine’s growth has rise steeply ever since the secret about NSA surveillance programs went uncovered. In the instant outcome of Edward Snowden’s disclosures, the search engine traffic flowed by 33 percent.

The CEO of DuckDuckGo, Gabe Weinberg stated in a recent interview with CNBC, “We’re doing about three billion searches a year. So we’re already pretty mainstream.”

Without a doubt helping DuckDuckGo’s development is that the web search engine has since become a choice for both Safari and Firefox consumers. With iOS devices, for example, Apple first time in the history let consumers to switch smartphone Safari’s browser to DuckDuckGo from Google.

Apple added DuckDuckGo as a search option in iOS 8, joining Bing, Yahoo and Google among the choices. Google is default search engine that’s selected by default, but users have the option to switch to other three – and decent number of Apple users seem to be switching to DuckDuckGo. This move, combined with all the rising privacy concerns over the time has helped the privacy focused search engine to grow exceptionally well.

The chart below shows, the number of queries per day controlled by DuckDuckGo are nearly sloping up vertically. 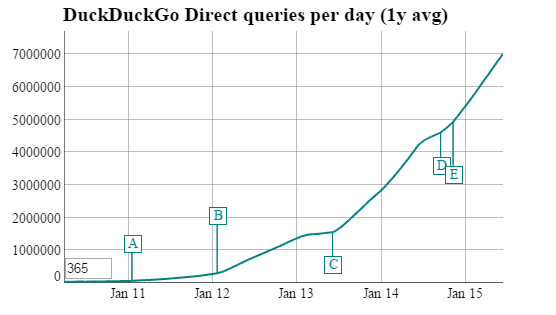 Although the search engine doesn’t track users’ steps, Weinberg clarifies how the website is able to generate money.

“It’s really a myth that you need to track people to make money in search, so we make money just with keyword advertising,” Weinberg explained. “So you type in car and you get a car ad. And it’s really that straight forward. Google tracks you on all of these other sites because they run huge advertising networks and other properties… so they need that search engine data to track you.”

In spite of DuckDuckGo’s progress in the last two years, the search engine hasn’t been able to put a dent on Google’s supremacy. According to the StatCounter, the DuckDuckGo is getting only 1% visitors on smartphone search market, from America. But the CEO of the search engine said, he is assured the firm can keep progressing, adding even with zero tracking, the search engine is able to sell advertisements.

Weinberg said, “If you just focus on Web search, you don’t really need to track people.”

Now what’s the takeaway for us from DuckDuckGo’s search growth? Isn’t it a sign that more and more people around the globe are getting more conscious about their privacy online? It pretty much suggests exactly that, which as Security Gladiators is great to see! Moreover, it clears the fact pretty pretty well that as folks are getting educated on cyber security better over time, they are making moves to minimize the chances of being tracked online.

Ali Raza
Ali is a freelance journalist, having 5 years of experience in web journalism and marketing. He contributes to various online publications. With a Master degree, now he combines his passions for writing about internet security and technology for SecurityGladiators. When he is not working, he loves traveling and playing games.
Home Internet Security News DuckDuckGo traffic grown 600% since 2013, thanks to NSA and Apple
Leave a Comment Cancel reply