The very first robot that anyone in any country built was in Japan in 1929.

And the person who built it named it Gakutensoku.

In English that meant, ‘learning from the laws of nature.’

Makoto Nishimura, a biologist by profession, was its creator.

Later, he would profoundly say of hits then latest mechanical progeny that if someone considered humans as only the children of nature then artificial humans which would come into a state of existence via work from the hand of man would be the grandchildren of nature.

Sometime later, the robot was enthusiastically unveiled at the ascension ceremony of Emperor Hirohito.

After that, the robot went on a country-wide tour.

At one of the shows, a novelist by the name of Hiroshi Aramata wrote that when he looked at the machine shaking its head, he felt that the machine was actually trying to express the agony it felt because of it coming into existence.

However, those days are truly well and over.

Now, in the very near future, robot scientist would do things that human scientists would never think of doing.

If everything goes according to plan then robot scientists would have everything they would need in order to dream up completely new materials in order to advance the field of computing and also fight the war of pollution.

The company that is trying hard to make sure that future takes place is Kebotix.

More specifically though, the company is making use of robotics and AI in order to first brainstorm and then test various novel compounds.

In Cambridge, Massachusetts there is a laboratory which overlooks a fairly busy shopping street.

This is where a robot is making attempts to come up with completely new materials.

In this laboratory, there is a robot arm which is busy dipping a pipette into a specific dish.

After doing that, the robot arm transfers a minuscule amount of liquid which is bright into one of several receptacles which are just sitting there in front of one other machine.

Both the robot arm and the machine are part of the same system.

And when the system detects that all the samples are in place and ready, there comes another machine whose job is to test all of the samples for particular optical properties.

After that is done, the machine feeds the results to another computer which is responsible for controlling the robot arm.

Then there is another software which analyzes all the results of the samples and the experiments in order to formulate a few different hypotheses.

When that is done, the system starts the whole process all over again. 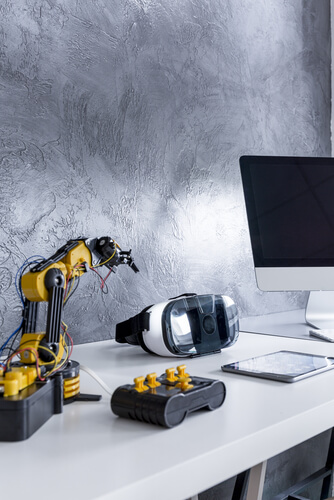 Kebotix is the startup that has developed this setup.

And the current state of the system provides us with a hint at how robotic automation and machine learning may be poised to make giant strides in the field of materials science and revolutionize it in the near future.

In any case, the company is fairly confident that its software learns from various models of molecules which are three dimensional and with properties that are known.

That is not entirely a new method since researchers already make use of software algorithms in order to design chemical materials and compounds.

However, the process is crude.

Typically, there is a machine which simply tests different (but only slightly) variations of a given material.

After doing that the machine blindly begins the process of searching for a new creation which is viable.

Robotics and machine learning could actually make the entire process much more effective and faster.

A lot of people realize this.

And that is why Kebotix is just one of the many robotics startups that have invested in this idea.

All startups are working for the same goal.

And that is to make use of machine learning techniques in order to generate new candidate materials.

The CEO of Kebotix, Jill Becker, recently had voiced his views that according to him the discovery process is very slow.

Since the process has many stages and is slow, very few ideas are actually tested.

And even fewer ideas provide results.

As far as Kebotix is concerned, the company makes use of a multiple number of machine learning techniques in order to design chemical compounds which are novel.

As alluded to before, the company goes about its business by taking molecular models of various compounds with properties that it desires and then feeding that into a type of artificial intelligence neural network which learns the related statistical representation of all those properties.

When the network has truly learned the required representation, the algorithm behind the network is then able to come up with and develop new examples which qualify to fit the exact same model.

Not only that, Kebotix makes use of another neural network in order to weed out all of those designs which stray a bit too far from the company’s original model and hence are likely to be, more or less, useless.

After going through that process, the company has a robotic system which has the ability to test all the remaining chemical structures.

When all of that is done, the results that come out of all the experiments are stored and then fed right back into the present machine-learning pipeline.

In this way, the machine learning network can get further help to get even closer to the chemical properties that the company desires.

Kebotix has dubbed the whole system in its laboratory as a practical self-driving lab.

The chief product officer of the company, Christoph Kreisbeck, recently said that Kebotix currently wanted to work with different molecules for electronic applications after which the company would try to tackle new alloys and polymers.

Kreisbeck also said that the artificial intelligence predicted and planned what the laboratory should do next.

Furthermore, he said, the machine had all the opportunity to learn from the present database and then make even better decisions when the time came for the next round of predictions and plan.

Zohair
Zohair is currently a content crafter at Security Gladiators and has been involved in the technology industry for more than a decade. He is an engineer by training and, naturally, likes to help people solve their tech related problems. When he is not writing, he can usually be found practicing his free-kicks in the ground beside his house.
Home Internet Security News Things a Robot Scientist Will Do to Transform Our World
Leave a Comment Cancel reply