Skip to content
Home How Tos Sherlock Series 4: How To Watch It Outside The UK

Sherlock Series 4 has just been released and judging by the ratings the show has received so far, it is safe to say that Sherlock has come back with a huge bang.

The year 2016 was a great season for people who like to watch high-quality series and 2017 looks set to become, yet another, great season for TV as far as content and viewership are concerned.

To make your new year truly special, you should definitely check out Sherlock Series 4. The best part about the show is that you can jump in anytime without regard of what happened before. Of course, it is always better to start a show from the beginning, but Sherlock is one of a kind in the sense that you can pretty much get a sense of what is happening in the series irrespective of which season you start with.

So you probably should know how you can watch Sherlock Series 4 at your earlier convenience.

Even before the premiere of Sherlock Series 4, media reports had already established that the first episode of the new Sherlock Series 4 series would air on January 1st, 2017 at 8:30 pm. That is if you live in the United Kingdom.

For the rest of the world, each person will have to convert time according to his/her own time zone and date.

If you happen to live in the United Kingdom then you don’t really need to know how to watch Sherlock Series 4.

Because you can simply tune into Sherlock Series 4 by turning your TV on and changing the channel to BBC One. It is as simple as that.

People who live in the United Kingdom were mostly able to watch the first episode of Sherlock Series 4 on New Year’s day without any problem.

But what if you don’t have access to a TV? How do you watch Sherlock Series 4 then?

Well, in that case, you can use BBC iPlayer to stream the first episode of Sherlock Series 4 live and online.

But what about people who live outside the United Kingdom?

If you happen to live anywhere outside the United Kingdom, you won’t be able to log in to BBC iPlay. As a result, there isn’t much you can do if you want to watch Sherlock Series 4. You’ll be left devastated (depending on how much you like Sherlock Series 4) because you’ll be blocked from watching Sherlock Series 4 online.

Is there a solution?

How To Watch Sherlock Series 4 Outside The UK

As mentioned before in the guide as well, there are many ways to watch Sherlock Series 4 outside the United Kingdom.

But the easiest and most efficient one is through the use of a VPN service. With a VPN service, you can watch Sherlock season 5 outside the UK from any country in the world.

All you need is an account with a reputed VPN service.

A VPN service basically enables its subscribers, or users, to hide their online location and spoof other servers into thinking that the user is someplace else (of his/her choosing of course).

And because no one can tell where you reside when you’re connected to the internet through a VPN service, you can gain access to online streaming services such as BBC iPlayer without any blocked content.

Your real location becomes irrelevant and you can consume useful content as a true citizen of the world rather than a citizen of, say, Kazakhstan.

If you don’t know what you’re doing or reading, then you can easily be tricked into buying a poor VPN service or even worse, a fake VPN service.

The number one VPN service today is, without a doubt, IPVanish. It is the highest rated VPN service on our list of best VPN service providers.

If you want to watch Sherlock Series 4, then you’ll need to sign up for an account and choose from their offered services.

You can easily sign up for IPVanish service by clicking the button below.

The IPVanish, which is a premier VPN service provider, costs around $6.49 per month if you sign up for the service for a period of 12 months. On a monthly basis, that cost comes down to about £4 to £5.

What To Do After You Have Signed Up For IPVanish

One you have subscribed for an IPVanish package, things only get easier.

Your first step will be to download IPVanish software application from the official website and then install it on your laptop or any other computer machine. You can also download IPVanish for your mobile devices such as smartphones or tablets.

IPVanish has native apps for almost all operating systems and hardware platforms.

If you go to the official website of IPVanish, you can easily see the button where you can download their official software application.

Just click the Apps tab on the official website and you’ll be taken to the relevant page.

If you want to make use of IPVanish mobile applications then you can do that by visiting Google Play Store. If you happen to have an iPhone or an iPad and want to use IPVanish on that, then you should head over to IPVanish Apple App Store page.

This way you can easily use IPVanish with your smartphone or tablet without any problems.

As indicated earlier, once you have downloaded the official IPVanish app for your operating system and device, then you need to make sure you install it on your device.

After that, you need to run the application on your device or any other computer machine.

When the IPVanish application is running, it will prompt you with a login screen. In other words, you’ll need to log in to the application with your unique details such as username and password. You should have these stored someplace safe. These details are provided to you when you sign up to IPVanish VPN service.

One you are logged in to the IPVanish software application, you should select your country as the United Kingdom and then click (or tap) Connect. 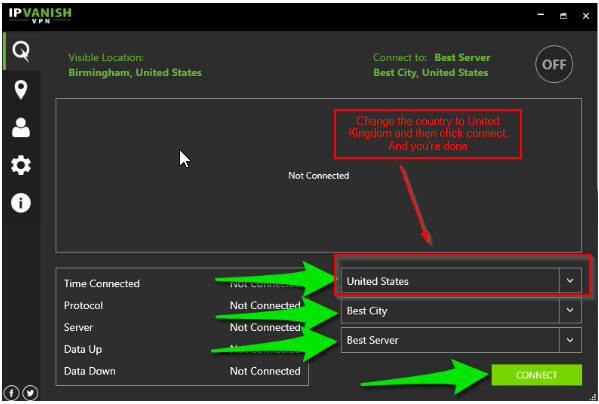 When you’re done with that, then all you need to do is sit back and relax until the IPVanish software application automatically connects you to the internet through one of its VPN servers.

Once you are connected to the internet through an IPVanish server then you need to visit the official BBC iPlayer website.

And since you’re now tagged as a user from the United Kingdom you can watch Sherlock Series 4 online from outside the UK.

Chances are that you already missed the live event on January 1, 2017. If that is indeed the case then you can easily use the catch-up service to watch Sherlock Series 4 from outside the UK at a later date.

No need to hold up all your other plans in order to make room for a live episode of your favorite TV show. You can easily live your life on your own terms and then come back to watch Sherlock Series 4 with the help of a VPN service, IPVanish in this case, from outside the United Kingdom without having to worry about a thing in the world.

As we have already mentioned in this guide, the first episode of Sherlock Series 4 aired on January 1, 2017, at 8:30 pm GMT. However, you can watch all the following episodes of the season on every Sunday.

What To Do After You Have Watched Sherlock Series 4?

When you have spent a bit of time on Sherlock Series 4 or have watched all the available episodes, then you can simply disconnect from the IPVanish VPN service.

After you have disconnected, your internet connection will go back to being normal.

What Is Sherlock Series 4 About?

The first thing you should know about Sherlock Series 4 is that it is one of the most watch TV series in the world. Its popularity has skyrocketed upwards every season since the start of the show.

Naturally, Sherlock Series 4 will be no exception as far as popularity and quality of content are concerned. The show will offer a lot of thrills to people who like to watch witty spy-detective shows.

Sherlock season 3 ended with Sherlock trying the fool the audience and tricking them into believing that Moriarty was dead.

Of course, Sherlock knew exactly what was going on and what would happen next, but since people like suspense, the creators of the show were left in suspense as the fat of Moriarty could not be determined for sure.

Unfortunately, the news about Benedict Cumberbatch (Sherlock) leaving the show have picked up more pace than ever. Hence, we should all expect him to leave the show after Sherlock Series 4.

It has also been revealed that the main cast of Sherlock have a pretty tight schedule keeping up appearances on other projects and hence the show may not be able to keep up its yearly format.

Since we don’t want to spoil the series for you but still want to give you something to chew on, check out this Sherlock Series 4 teaser trailer.

Why Can’t Anyone Watch Sherlock Series 4 Outside The UK?

In other words, you want to know why the show is blocked outside of the United Kingdom?

You should already know by now that you can unlock any content that is region locked in the UK with the use of a VPN service.

Why can’t you view it without using a VPN service?

Because, whenever a user connects to the internet, the computer associated with the user is assigned an IP address.

An IP address is nothing complex. It is simply a series of numbers arranged in a random fashion. Most IP Addresses go something like 123.98.0.165.

As you can already imagine, the IP address of a computer machine looks awfully like a phone number.

The functions are very different through. Without an IP address, you cannot connect to the internet. An IP address also helps the internet to function properly.

Moreover, it helps the people working at the backend of each and every website to know which user requested what content. It also tells them where to send the response in the form of bits of data.

All IP address have specific geographic locations attached to them. And because of this fact, sites like Netflix and BBC iPlayer can know your location and can block access to region specific content from viewership.

As pointed out above, you can use a VPN service like IPVanish and many other VPN service providers out there in the market to change your IP Address for the time being.

Once you have changed your IP Address to another one which makes websites think that you live in the United Kingdom, then you can access BBC iPlayer along with any other region locked content without any trouble.

In our case, you can use IPVanish to watch Sherlock Series 4 outside the UK with ease.

Zohair A.
Zohair is currently a content crafter at Security Gladiators and has been involved in the technology industry for more than a decade. He is an engineer by training and, naturally, likes to help people solve their tech related problems. When he is not writing, he can usually be found practicing his free-kicks in the ground beside his house.
Home How Tos Sherlock Series 4: How To Watch It Outside The UK
Leave a Comment Cancel reply