The FBI and Apple are currently awaiting court regarding a government request for a backdoor to the iPhone, which has been used by Syed RizwanFarook, San Bernardino terrorist. This is the tip of the iceberg, with the wider picture including the debate as to which of the phones nowadays can live up to the challenge of online security. 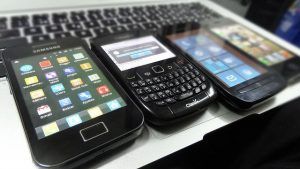 Ever since BlackBerry was introduced with its encryption, online security has been of primary importance and phone companies have been fighting over the best-selling products that allow users to remain safe online.

Harvey Anderson from AVG Technologies highlights the need of the phone market to come up with the best products related to online security: “The tech industry tries to build the most secure products possible.”, according to his quote and this makes total sense, of course.

However, there is no phone that has already succeeded in maintaining absolute online security. Even Apple that has claimed total security could not cope with that and this is most eloquently displayed in the case of Syed RizwanFarook. “If Apple had done it right, and no backdoor was available (to iPhone 5c), this would not be an issue.” quoting Harvey Anderson here as well.

Now, let’s have a closer look at the various popular phones found on the global market today. This will help us get the wider picture and see which type of phone you should go for!

Android: The Android devices take up the biggest share of the pie, when it comes to sales all over the world. Google has decided to give away its software and this has influenced its future security-wise. This in turn has led to great popularity, affordable cost but also increased vulnerability. Users need to have strong Android security, though.

About 80% of the total smartphones worldwide have got Android OS and this says something! The open app system might affect security and cause problems, while there is also a threat in downloading unauthorized apps and using them without any prior test drive. Samsung’s Knox is perhaps the safest way to go, if you wish to use Android.

Apple: It has been widely acknowledged that Apple devices are the safest on the market to this date. Due to the AES-256 apple encryption and thanks to the fact that there is no such thing as downloading unauthorized apps and using them without any problem, iOS has remained safe along the way. However, this does not automatically mean that Apple phones are immune to online threats and you can never worry too much, in terms of online security.

Windows: Windows 8.1 and 10 come with encryption and this adds to their overall layer of online security. Although it is up to the user to turn on encryption and enhance protection, it is a great step and can help out towards decreasing phenomena of online vulnerabilities. In addition, due to the fact that there is no wide library with apps for you to choose from, there is a limited spectrum for affecting online security. But still Windows is not fully secure either, it was reported to be vulnerable to Freak attacks – to list one example out of the wild.

BlackBerry: Although the BlackBerry used to be the epitome of online security for more than ten years, nowadays there is no actual interest in buying such devices and therefore the encryption provided does not seem to have any impact in their sales. Nevertheless, Blackberry continues on being really safe and protected. This is a bonus, if you are already interested in buying a BlackBerry!

Last but not least, we should refer to Silent Circle’s Blackphone 2 that includes full and advanced encryption by default. Besides the Android OS, you can choose to use the exclusive private Silent OS.

Whatever you select to use as a smartphone, do not neglect to check out privacy settings and online security options to keep hackers away from your phone.